How does the way our bodies respond to alcohol relate to future alcohol problems?

People respond to alcohol in different ways, and those differences can affect how at risk they are for developing problems.

The key takeaway: Some genes affect how our bodies break down alcohol making some people feel sick after consuming alcohol, which protects them from the development of problems. Other genes impact how many drinks people need to feel any effect from alcohol. People with a low sensitivity per drink (who need more drinks to feel effects) are at elevated risk of developing problems. But DNA is not destiny! Ways to reduce that risk include avoiding heavy drinking friends, not using alcohol to deal with stress, and finding ways to have a good time that don’t involve alcohol.

How does response to alcohol relate to future alcohol problems?

People do not all (sidenote: A low response to alcohol, or needing more alcohol to obtain a specific effect, is one of many risk factors for future alcohol problems.) in the same way and those differences can impact how a person consumes alcohol (how much, how often, and potentially how quickly) and how at risk they are for developing problems.

Some genes influence how our body breaks down alcohol. Alcoholic beverages contain ethanol, a specific type of alcohol. Our cells break ethanol down into smaller molecules that can either generate energy or be used to construct fats and other components of cells. This typically takes place in the liver. Specific enzymes are used to metabolize ethanol. First, ethanol is processed into acetaldehyde, a relatively toxic substance, by one or more enzymes (such as alcohol dehydrogenase). Acetaldehyde is then rapidly converted to acetate, a nontoxic substance, by aldehyde dehydrogenase. Gene variants for these enzymes have been found to either increase or decrease risk for AUD. These include genes involved in production of alcohol dehydrogenases (such as ADH1B) or aldehyde dehydrogenases (ALDH2).

For example, people with a specific variant of ALDH2 called ALDH2*2 have a slower processing of acetaldehyde, resulting in a very strong facial flushing, along with nausea, headaches, and other unpleasant effects after drinking alcohol, which understandably reduces their drinking and thereby reduces their risk of developing AUD.

Some variations in another gene, ADH1B, speed up the production of acetaldehyde. Although that variant doesn’t cause strong facial flushing like ALDH2*2 (which prevents acetaldehyde from breaking down) it can also be protective against risk for AUD by causing unpleasant side effects associated with quicker conversion of alcohol into acetaldehyde.

Other variations in the way the body metabolizes ethanol can either reduce or increase risk of developing AUD, and alter the effects of alcohol on other processes in the body.

Other genes influence how we experience the effects associated with alcohol.

Alcohol responses are considered of two types: stimulating and sedating. Some examples of a stimulating response include feelings of being elated, energized, or excited. Some examples of a sedating response include feelings of being sleepy, relaxed, or having problems thinking clearly. People can enjoy or dislike these sensations, and each can be different when blood alcohol levels are rising or falling. Drinkers are likely to change the way they consume alcohol to obtain the most desired sensations.

Risk for future alcohol problems has been found to be associated with both stimulation and sedation effects after consuming alcohol. More intense feelings of stimulation early in a drinking session, especially when the blood alcohol levels are rising, could increase pleasant feelings associated with drinking that then increase the probability of drinking more often and at higher quantities.

Other people have relatively low responses per drink, an attribute that might contribute to consuming higher quantities of alcohol to get the effect they desire. The higher the number of drinks required to get desired effects, the greater the number of drinks a person is likely to consume per occasion. Studies have consistently found that people who experience a low response per drink when they start drinking are at least twice as likely to develop an alcohol use disorder compared to individuals with higher responses per drink. This risk is greatest in those with a family history of alcohol problems. 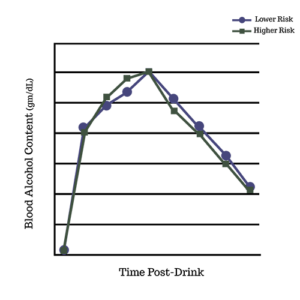 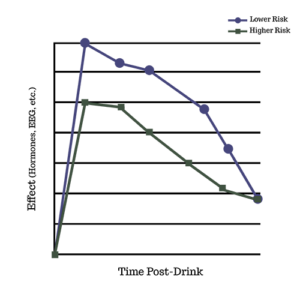 The chart on the right shows how some individuals report much lower effects associated with drinking alcohol, despite having blood alcohol concentrations similar to their peers (chart on the left). These individuals with a lower response are at higher risk of developing AUD.

Can people decrease that risk?

(sidenote: Ways to reduce that risk include avoiding heavy drinking friends, not using alcohol to deal with stress, and not believing that alcohol is necessary to have a good time.) People cannot change how they respond to alcohol, but they can understand how their response impacts their decisions and interacts with their environment. Here’s how a low level of response to alcohol contributes to the development of problems: The need for higher exposures of alcohol to get desired effects contributes to heavy drinking and choosing friends who are heavy drinkers, attitudes that heavy drinking is a good way to have fun, and to the tendency to use alcohol to help deal with life’s problems. Subsequently, heavier drinking is likely to contribute to feelings of depression and interpersonal problems with relatives and friends, where the person is likely to turn to alcohol to cope with stressful situations, many of which might have developed as a result of heavy drinking in the first place. This pattern creates a gene/environment/attitude model of the risk for alcohol use disorders. But there’s good news: Teaching people about these risks helps! A recent study showed that teaching this gene/environment/attitude model to drinking college students who have a low response to alcohol was associated with subsequent decreases in heavy drinking and alcohol problems over the next year. Understanding your risk is key to decreasing your risk.

Schuckit MA. A Critical Review of Methods and Results in the Search for Genetic Contributors to Alcohol Sensitivity. Alcohol Clin Exp Res. 2018 May;42(5):822-835.