What is the importance of brain function in the development and persistence of Alcohol Use Disorders?

The way people’s brains are wired can increase their risk for alcohol misuse and development of alcohol use disorders. Harmful alcohol use can affect the structure and function of your brain which impacts your thinking (impulse control and decision making) and behavior.

The key takeaway: Some individuals from families with many members affected with alcohol use disorder may show differences in brain functioning before they ever drink, and are at higher risk for problematic drinking and developing alcohol use disorder. In addition, chronic and hazardous use of alcohol has harmful effects on the brain and its functioning, which impacts thinking and behavior.

Changes in the structure and functioning of the brain have long been known to accompany chronic and harmful alcohol use. Some of these brain changes are known to recover as a person remains sober, while others persist and lead to addiction. These brain differences involve impairments in specific brain networks, or areas of the brain that work together closely. Networks that are involved in the ability to control an impulse and make decisions, respond to reward, and regulate emotion have been shown to be impacted in alcohol use disorder. Different brain networks are involved in the different stages of alcohol use disorder. These brain changes affect reward/emotion regulation and decision making which contribute to the development and persistence of alcohol use disorders. [See this report for details: THE NEUROBIOLOGY OF SUBSTANCE USE, MISUSE, AND ADDICTION]. 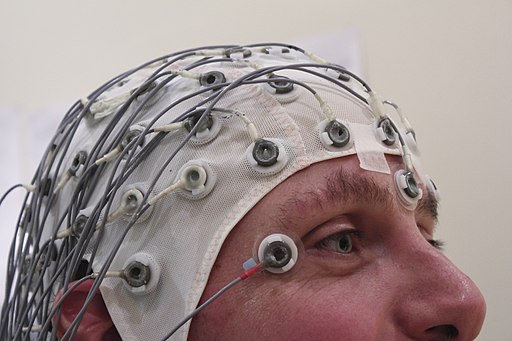 The brain is always active, even during sleep, as the brain cells, or “neurons” are constantly in communication with each other in networks, causing electrical fluctuations in the brain called brain waves. These brain waves or “neural oscillations” are detected using a method called the (sidenote: EEG is a method to record the electrical activity of the brain using electrodes placed along the scalp.) The brain’s natural EEG can be recorded while people are resting. The brain’s electrical activity can also be measured while an individual is performing a simple task, such as pressing a button when they see a specific picture shown on a computer screen while ignoring other pictures. Brain waves recorded during a task or event are called event-related potentials (ERPs) and event-related oscillations (EROs). ERP and ERO analysis allow us to evaluate different ways the brain works, such as identifying specific images or sounds, decision making, or emotional processing. Some studies of brain waves at rest and during tasks show how different areas of the brain communicate and work together, like musicians in an orchestra; when brain areas are not working together, a person’s thinking and behavior may suffer.

Studying brain waves helps us to detect and understand the impact of heavy drinking on brain functioning, such as decision making, the ability to control an impulse, how people respond to rewards, and memory, as well as existing differences in these brain functions in those at higher risk for AUD before they ever drank alcohol. These brain wave measures, examined along with other risk and protective factors for AUD, and the effects of alcohol consumption on the development of the adolescent human brain, can be used to identify and understand the factors that may put an adolescent at greater risk for an alcohol use disorder. 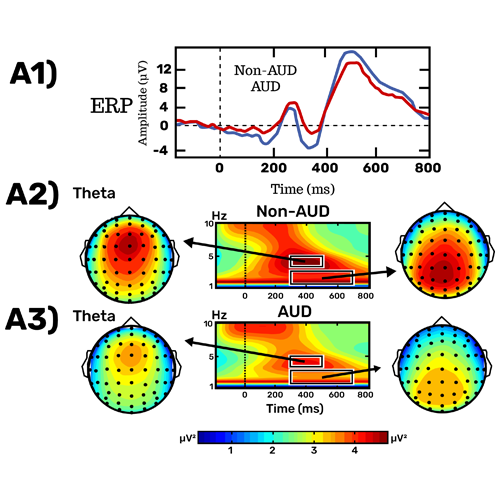 Early studies of young sons of fathers with AUD found that they had similar brain wave features as their fathers and other adults with AUD, even before they drank alcohol; later studies showed similar findings in daughters and sons of both mothers and fathers with AUD. These studies focused on an ERP brain wave, called the (sidenote: It is usually the largest brain wave component of the event-related potentials (ERP), which typically occurs around/after 300 ms and reflects processing of the task’s context and/or demand, including stimulus evaluation and decision making.) a large positive wave that reaches a peak shortly after performing a mental task, such as pressing a button to only certain images while ignoring others (Begleiter et al 1984). This finding showed that brain wave abnormalities observed in children of fathers with AUD may be a marker of higher risk for developing AUD, and not simply a result of years of heavy drinking. The idea that some brain wave measures may indicate higher risk that was passed along from parent to child changed how we study AUD and was a main motivation to launch the COGA project. From its inception 30 years ago, a primary emphasis of the COGA project has been to study brain function as a measure of higher risk in families with alcohol use disorder (AUD) including their relatives and children. We have also studied genetic and environmental influences on these brain function measures and how they affect a person’s risk of AUD or their resistance to it throughout adolescent and young adult development and continuing throughout the lifespan.

What are some of the major findings associated with brain waves and AUD from the COGA study?

What are some of the major findings with brain waves and genetic factors from the COGA study?