Externalizing and Alcohol Use Disorders

Does externalizing behavior increase the risk for alcohol use problems?

“Externalizing” refers to a spectrum of behaviors and disorders related to self-regulation and impulse control. Our brains are all wired differently in terms of how we process risk and reward. This can lead to differences in how much we enjoy new and exciting activities (often called sensation-seeking or risk-taking), and if we are too quick to respond to the here-and-now (often called impulsivity), as opposed to carefully thinking through the consequences of our actions.

These characteristics vary continuously among all of us, but at the extreme, they can lead to problems. Furthermore, the greater the number of life problems these externalizing symptoms cause, the higher the likelihood that a mental health provider will give such an individual an externalizing (sidenote: A diagnosis requires the existence of a significant impairment that is chronic) As with any psychiatric diagnosis, an individual must suffer at least one important daily functioning problem (e.g., impaired work, poor school performance, or family relationships) related to these symptoms. Moreover, these symptoms should be worse than expected for that individual’s age, culture, and environment.

What are common externalizing diagnoses?

There are three externalizing behavior diagnoses that typically begin in childhood or adolescence. The first is attention deficit/hyperactivity disorder, with symptoms that include having unusual difficulty paying attention, frequent problems of being overactive, and high levels of impulsiveness. The second is oppositional defiant disorder, with frequent occurrence of: irritable mood, refusing to do what adults ask, and a strong desire for revenge. The third diagnosis is conduct disorder, defined as repeatedly stealing, lying, fighting, breaking rules, and ignoring others’ rights. It is not uncommon for individuals to have more than one such diagnosis. Among the three, the risk of developing an alcohol or substance use disorder is highest for conduct disorder, but the other two diagnoses are also linked to such an increased risk. All three of these diagnoses can change or become better as the child ages.

Adult externalizing behavior disorders can include a continuation of those mentioned above as beginning in childhood. The most serious adult diagnosis is antisocial personality disorder (ASPD), a more severe and continuing version of conduct disorder (most children with conduct disorder do not progress to ASPD). This diagnosis is made when an individual is at least 18 years old and has a history of externalizing behavior problems before age 15. The most frequent problems include a disregard for rules or laws, not caring about other’s rights or feelings, manipulating others, frequently lying, and often being aggressive to people, animals, or property. 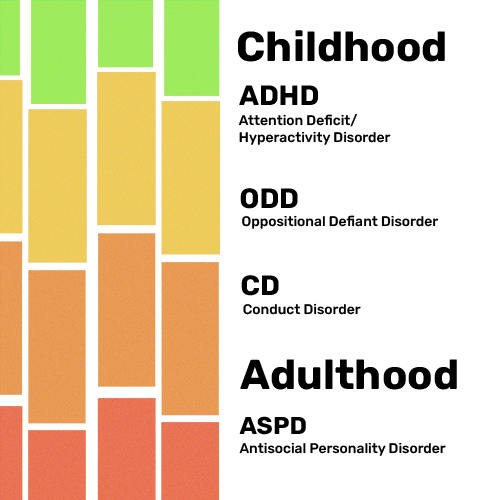 What is the relationship between externalizing disorders and alcohol and substance use disorders?

There is a close relationship between externalizing disorders and alcohol and substance use disorders. In fact, it is an even a stronger relationship than that found for internalizing disorders like anxiety or depression. One of the primary reasons that externalizing behaviors and disorders and substance use problems appear to occur together is because they are influenced by many of the same genes. In other words, part of the risk for alcohol use problems, is via a genetic tendency towards higher risk-taking and impulsivity. This can show up early in childhood as externalizing traits or disorders, and later can manifest as alcohol and other drug problems.

Part of the way we know these disorders share a genetic component is that children whose parents have alcohol use disorders are more likely to have externalizing behavior diagnoses, particularly conduct disorder. These children are more likely to inherit genetic risk from their parents, but they are also more likely to grow up in high-risk environments, which further increase their risk for developing these problems. Because genes influence behavior, they also impact the environments parents provide for their children. Environmental risk factors may include ongoing parental substance use and easy access to alcohol, parental fighting, parents who do a poor job of supervising or monitoring their children, poverty, poor achievement in school, and friends who break rules and encourage others to do the same.

What can decrease the relationship of externalizing disorders and alcohol and substance use disorders?

We can’t change our genes, but we can change the environment. Changes in parenting style, family environments with more parental monitoring and awareness of what children in the family are doing; seeking treatment for childhood externalizing disorders; seeking help for youth with alcohol or substance use problems; and a willingness on the part of parents to make major lifestyle changes (such as decreasing drinking or parental discord) can often keep behavior problems from developing into full-blown disorders or make existing disorders better.

Getting help for externalizing problems early can decrease the likelihood that children with externalizing tendencies will go on to develop alcohol problems. If you are a parent with a child who is struggling, one of the COGA investigators has written a book The Child Code to help parents understand how to intervene early and effectively parent children with different dispositions.

Genes associated with alcohol outcomes show enrichment of effects with broad externalizing and impulsivity phenotypes in an independent sample. https://www.ncbi.nlm.nih.gov/pubmed/25486392

The Genetics of Externalizing Problems https://www.ncbi.nlm.nih.gov/pubmed/31845132

The genetics of alcohol and other drug dependence https://www.ncbi.nlm.nih.gov/pubmed/23584813

How phenotype and developmental stage affect the genes we find: GABRA2 and impulsivity https://www.ncbi.nlm.nih.gov/pubmed/23561058

Development of Alcohol Use Disorder as a Function of Age, Severity, and Comorbidity with Externalizing and Internalizing Disorders in a Young Adult Cohort https://www.ncbi.nlm.nih.gov/pubmed/31853508

Externalizing disorders and substance use: empirically derived subtypes in a population-based sample of adults https://www.ncbi.nlm.nih.gov/pubmed/24907047