What can Polygenic Risk Scores (PRS) tell individuals about their risk for alcohol use disorder (AUD)?

The key takeaway: We can now measure one’s genetic vulnerability to some common disorders using polygenic risk scores (PRS), which combine the effects of many genes into a single risk score. A PRS can summarize part of the risk for a disease. Because we are still in the process of finding all the genes involved in risk for alcohol use disorder, currently PRS are not highly predictive, so they aren’t widely available to the public yet.

What does it mean when we say that Alcohol Use Disorder is a polygenic disease? (sidenote: A medical condition characterized by an impaired ability to stop or control alcohol use despite adverse social, occupational, or health consequences.) is a common, complex disease that occurs as a result of many genomic variants, paired with environmental influences (such as stress, depression, and smoking). Alcohol use disorder is called a “polygenic” disease – with “poly” meaning that many and “genic” meaning genes – contribute to the risk of developing this disease.

What is a polygenic risk score? 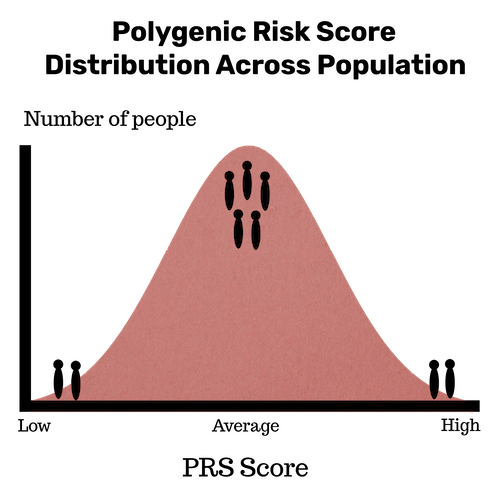 With the advent of genetic testing at low cost, we can now measure one’s genetic vulnerability to some common disorders using (sidenote: A number that summarizes the estimated effect of many genetic variants on an individual’s risk for a particular disease.) (PRS), which combine the effects of many genes into a single risk score. A PRS can summarize part of the relative risk for a disease. Most people will find their scores to be in the middle of a range, indicating average risk for developing alcohol use disorder. Others may find themselves at either lower or higher relative risk. We must remember that with PRS for alcohol use disorder, as for most other disorders, genes are not destiny. You can learn more about PRS here.

What can PRS tell individuals about their risk for alcohol use disorder?

At present, PRS summarize only a small portion of the risk. In addition, PRS generated from one ethnic or racial group may not be applicable to persons from another group. Thus, at present PRS are not used in clinical healthcare settings. Also, there is the concern about stigmatization associated with a prediction of higher risk and the misunderstanding on the part of some that risk implies destiny. Nonetheless, some private healthcare and direct-to-consumer companies have begun generating PRS for their consumers. One should be careful to take such measures with a grain of salt, and not make the mistake of thinking they will define one’s path.

PRS may someday serve as an important new tool to guide people about how to improve their health. They may also aid in healthcare decisions. At this time, however, we need more research to understand how having a PRS can improve one’s health, while not adding to stigmatization or other harmful consequences.

Additional information about genetic testing can be found on the website of the Psychiatric Genomics Consortium.