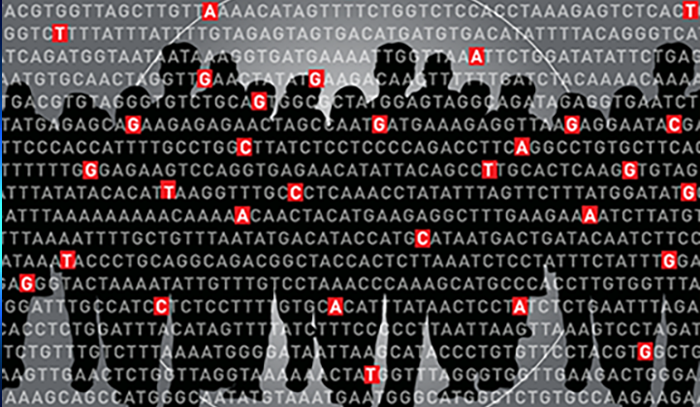 Alcohol use disorder is genetically influenced, but there’s no one gene that influences risk. We can now measure one’s genetic vulnerability to some common disorders using polygenic risk scores (PRS), which combine the effects of many genes into a single risk score. At the moment, PRS summarize only a small portion of an individual’s risk for alcohol use disorder, but COGA investigators are hard at work to improve both the methods for measuring PRS as well as their impact.

Genetic risk scoring is a popular method for studying predispositions to complex traits, such as behaviors and psychiatric outcomes. Statistical models that examine the influence of genetic risk scores on complex traits are often designed to rule out alternate explanations for the association between the genetic risk score and the complex trait. Bias may be introduced to the model if the alternate explanation is also influenced by the genetic risk score. In this project, we test a statistical approach (Principal Component Analysis, or PCA) to leverage the wide variety of data that is available in many large cohort studies to reduce this bias. We found that under select assumptions about the input data used in PCA, our method improves the estimate of the influence of a genetic risk score for problematic alcohol use on alcohol use disorder criterion count. This approach makes efficient use of existing data resources in many large cohort studies, which should be treated as a high priority in complex trait genetics where data collection is costly and polygenic effect sizes are often small.
Thomas, N. S., Barr, P., Aliev, F., Stephenson, M., Kuo, S. I., Chan, G., Dick, D. M., Edenberg, H. J., Hesselbrock, V., Kamarajan, C., Kuperman, S., & Salvatore, J. E. (2022). Principal Component Analysis Reduces Collider Bias in Polygenic Score Effect Size Estimation. Behavior genetics, 52(4-5), 268–280. https://doi.org/10.1007/s10519-022-10104-z

A polygenic risk score is a measure of a person’s genetic vulnerability for a particular disorder. In this study we have used the polygenic risk score for alcohol use disorder, in combination with other characteristics such as sex and family history of alcohol problems, to see whether that might help identify young people who may need treatment to prevent drinking problems from getting worse. The polygenic risk score helped identify groups at risk, but we still need more research before applying it to individuals in a clinic.
Nurnberger Jr, J. I., Wang, Y., Zang, Y., Lai, D., Wetherill, L., Edenberg, H. J., … & Parsian, A. (2021). High Polygenic Risk Scores Are Associated With Early Age of Onset of Alcohol Use Disorder in Adolescents and Young Adults at Risk. Biological Psychiatry Global Open Science. https://doi.org/10.1016/j.bpsgos.2021.10.007

Suicidal thoughts and behaviors represent a range of heritable phenotypes. The extent to which these phenotypes are influenced by genetic components, and how genetically similar or different these phenotypes are from each other, is of great interest. In this study, we explored whether genetic risk scores for non-suicidal self-injury, self-harm ideation, non-fatal suicide attempt, death by suicide and depression were associated with a broad range of self-reported suicidal thoughts and behaviors in the Collaborative Study on the Genetics of Alcoholism (COGA). Our findings provide evidence that genetic risk for the aforementioned phenotypes is significantly associated with suicidal thoughts and behaviors, and for some behaviors, these genetic risk scores explain unique variation. For example, when we simultaneously tested the associations between active suicidal ideation (i.e., suicidal ideation that includes having made a plan for an attempt) and genetic risk for self-harm ideation, non-fatal suicide attempt, death by suicide and depression, all associations were significant in the same model, suggesting unique genetic contributions from each phenotype. In a model that included all genetic risk scores simultaneously, genetic contributions from all five phenotypes together explained 6.2% of the variance in suicide attempt in COGA. These results provide further evidence that suicidal thoughts and behaviors are partially genetically distinct from each other and depression. As part of this study, we also conducted the first genetic association study of non-suicidal self-injury to date, using UK Biobank data; we hope the publicly available summary statistics from this study will be a valuable resource for other researchers in the future.
Colbert, S. M., Mullins, N., Chan, G., Meyers, J. L., Schulman, J., Kuperman, S., … & Johnson, E. C. (2022). Polygenic contributions to suicidal thoughts and behaviors in a sample ascertained for alcohol use disorders. medRxiv. https://doi.org/10.1101/2022.08.18.22278943