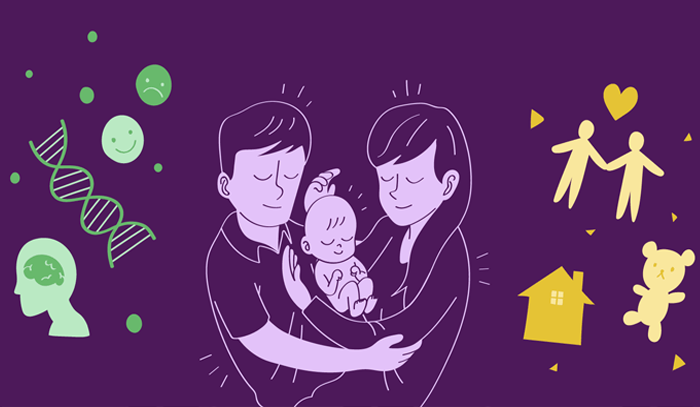 Science tells us that both our genes AND our environments shape the likelihood that we will develop problems with alcohol use. Because the COGA study has a wealth of data on both genetics and environments, our investigators are uniquely positioned to explore both simultaneously. See the summaries of a few recent publications to better understand the intersection of these impacts.

The associations between polygenic risk, sensation seeking, social support, and alcohol use in adulthood

Genetic predispositions play an important role in the development of alcohol use disorders (AUD). Understanding the psychosocial mechanisms through which genetic risk unfolds to influence AUD is critical for identifying modifiable targets and developing prevention and intervention efforts. In this study, we examined the role of sensation seeking and social support from family and friends in mediating the effect of genetic risk on AUD symptoms. Data were drawn from a sample of 5,141 European Americans from the Collaborative Study on the Genetics of Alcoholism (46% male, Mean age = 41.44, SD = 14.30). Results from path analysis indicated that genome-wide polygenic scores for alcohol consumption (alc-GPS) and risky behaviors (risk-GPS) were associated with higher sensation seeking, which in turn was associated with more AUD symptoms. In addition, higher risk-GPS was associated with lower social support from family (but not friends), which in turn was associated with more AUD symptoms. The pattern of associations was similar regardless of whether parents were affected with AUD, with some differences observed between males and females in the associations between social support and AUD symptoms. Our findings highlight the important role of intermediate phenotypes and gene-environment correlation in the pathways of risk from genetic predispositions to complex alcohol use outcomes.
Su, J., Kuo, S. I., Aliev, F., Chan, G., Edenberg, H. J., Kamarajan, C., McCutcheon, V. V., Meyers, J. L., Schuckit, M., Tischfield, J., & Dick, D. M. (2021). The associations between polygenic risk, sensation seeking, social support, and alcohol use in adulthood. Journal of abnormal psychology, 130(5), 525–536. https://doi.org/10.1037/abn0000568

Genes play an important role in whether someone develops alcohol use disorder or engages in other risky alcohol behaviors, but not all individuals who are at-risk due to genetic factors go on to misuse alcohol. Yet, little is known about what the “active ingredients” are for promoting resistance to alcohol misuse. In this study, we followed a sample of 1858 adolescents for whom we had genetic information, and examined whether relationships with parents, peers, and romantic partners promoted resistance to three outcomes: early age at initiation, early age at heavy episodic drinking, and lifetime alcohol dependence. Of the parenting, peer, and romantic partner predictors examined, we found that adolescents who reported having a higher-quality relationship with their father were more resistant to early age at initiation. Unexpectedly, we also found that adolescents who were more socially competent were also less resistant to heavy episodic drinking. The findings from this study underscore how little is known about the factors that promote resistance to alcohol misuse, and the need to understand why individuals remain healthy despite being at high biological risk.
Stephenson, M., Aliev, F., Kuo, S., Edwards, A., Pandey, G., Su, J., . . . Salvatore, J. (2022). The role of adolescent social relationships in promoting alcohol resistance: Interrupting the intergenerational transmission of alcohol misuse. Development and Psychopathology, 1-15. https://doi.org/10.1017/S0954579422000785

Genetic factors play an important role in the intergenerational transmission of alcohol use disorder. Typically, when we think about how genetic risk is passed from generation to generation, we think about the genotypes that children inherit from their parents. Yet, this represents only one potential way that genetic risk may be transmitted in families. This is because parental genotypes can also influence the type of familial environment that children experience. In this study, we tested whether aspects of the childhood/adolescent home environment (parental relationship discord and parental divorce) mediated genetic risk for alcohol problems in families across generations. Consistent with our expectations, we found that parents transmit genetic risk for alcohol problems to their children not only directly, but also indirectly via exposure to higher levels of interparental discord and relationship dissolution.
Thomas, N. S., Salvatore, J. E., Kuo, S. I., Aliev, F., McCutcheon, V. V., Meyers, J. M., Bucholz, K. K., Brislin, S. J., Chan, G., Edenberg, H., Kamarajan, C., Kramer, J. R., Kuperman, S., Pandey, G., Plawecki, M. H., Schuckit, M. A., Dick, D. M., &COGA Collaborators (2022). Genetic nurture effects for alcohol use disorder. Molecular Psychiatry. https://doi.org/10.1038/s41380-022-01816-z